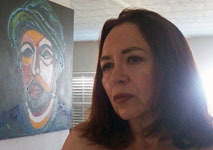 I was born in 1945 in Trouville-Sur-Mer, a charming little town on the Normandy coast, once the refuge of the Impressionists in the late 1800’s. My family moved to Paris when I was a young child and in my early 20’s, after a sojourn of one year in England, I settled in the Montparnasse quarter, favored then by artists and writers. As a student at the Ecoles des Beaux-Arts, I exhibited at the American Center on the left bank where I met Man Ray, the well-known artist and photographer. Swept into the spirit of the students’ revolution in 1968 in Paris, I decided to move to California to experience the cultural revolution of the 60’s in San Francisco.
Three years later, in 1971, I met the artist who would change my life, Max Shertz. I moved with Max and his family in a beautiful Victorian house with the view of the San Francisco Bay, on Union and Fillmore, in San Francisco. The next 17 years, I would study with Max, being his apprentice, muse, and finally his wife in 1990.
My studying with Max led me to be his companion in art, painting with him in San Francisco, Los Angeles, New York and in France. During our life time together, I supported my teacher/husband/artist, doing so by working at a regular job, meeting my family obligations, doing my art, and assisting Max with his various projects.
My supporting Max Shertz was not a blind choice. The genius of Max Shertz, which demonstrated itself, particularly starting in the 90’s with his abstract works of the unconscious, was worth what I considered “paying my dues.” I was sacrificing nothing. I had the very best teacher and the very best audience for my art. When it came to his art, Max was a tower of strength, discipline and control, associated with his passion and spirit which were grandiose. As a teacher, Max had high expectations but was also extremely supportive and inspirational.
Through the 38 years I spent with Max, I discovered that Art was a universal language, a vehicle of communication on a visual level, and Max was a magnificent communicator, not only visually with his art, but with words, captivating his audience with his mastery of the English language. his humor and wit incredibly rich and warm. And as Arianna Huffington [The Huffington Post and author of many books], then Arianna Stassinopoulos, said, when she met Max in 1984, “Max is a contemporary combination of Hermes and Zeus.”
With regard to my art, I did what my teacher told me to do and could only exhibit if he did so, and any project undertaken together would be brought to fruition according to the Master’s wishes. I had no choice or should I say, I had two choices, to stay and love it or leave. I never left or, when I did for a few years, I had to come back, my soul was lacking. Although we separated in 1992, only a few months later, I was drawing and painting with Max who was then very involved with his abstract works of the unconscious. It was a very productive period of time for the two of us. We also took trips to France, where we painted in various locales.
In 1997, we moved back together and painted together until 2005 when Max’ health started to decline drastically. The last thing Max did was a diorama of a small town in the Midwest, a miniature town with trees, people, in the fields, preparing the horses, the women going to do their wash, and streams going by. While doing the diorama, Max was losing his sight, could hardly hold a brush, and was always short of breath. It was the beginning of the end, and the end came with all the suffering it entails. In 2009 Max Shertz died peacefully at his home in Los Angeles.
It was a privilege to have known and worked with Max Shertz. Like all Greats, he could be infuriating but was so . . . “extraordinaire”.
An extended biography of Max Shertz can be viewed on www.maxshertz.com
Completely devoted to my husband and his work, I rarely exhibited during his life time, selling mostly my work privately from my studio. In 2009 I returned to painting, having stopped doing my art from 2005 to 2009, during the last years of Max’ illness.
My work is expressionist, figuratively and abstractly I create works of art spontaneously with no pre-conceived ideas, “automatically” much like my teacher taught me.
I reside in Los Angeles and sign my paintings {CFS} and paintings from other years are signed Christiane Flers Shertz, Christiane Shertz and Christiane Flers.
I have works at Mt Zion Hospital, some private collectors and exhibited works at the inauguration of the Healing Art Center in Newtown Connecticut in 2013.
`

“The Dawn Of Time”

“The Eye Of The Wolf”