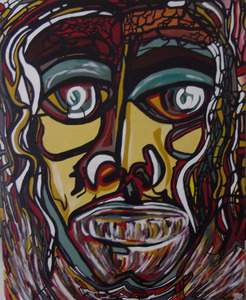 Jo Derbyshire was born in Liverpool UK in the Toxteth/ Dingle area of the city. Jo is an activist in contemporary art practice - a visual artist, writer and performer - who works in a range of media and who has exhibited nationally and internationally.

Jo was due to study Art and History at University but dropped out and got involved in the performance and poetry scene in Liverpool in the early 1990s.

In 1996 Jo had a play performed at the Unity theatre Liverpool before going back to study performance, literature and media, politics and history and art at Liverpool's three universities.

Jo was previously the Curator of the Egg Space Gallery in Liverpool, UK, was associate Curator to the South Bohemian Gallery and was involved with projects at Madelainartz Gallery, in Liverpool (UK). Currently Jo is part of the The Creative Network Association (TCNA) an organisation which is a creative platform that provides workshops to various organisations around the UK.

Jo was part of the International Arts Group Transvoyeur, Red Dot Exhibitions and has had various other associations and collaborations nationally and internationally. It was through working through the Transvoyeur platform that Jo became involved in a Liverpool and New York Exhibition 2006 and 2008, projects in Liverpool, Venice and Germany.

Two pieces of Jo’s work are in the permanent collection at the Royal Liverpool and Broadgreen Hospital NHS trusts which has hosted work by the noted English painter Bridget Riley.

Jo currently has work on loan to The Gallery, Clayton Square in Liverpool and the restaurant Que Pasa Cantina in Lark Lane in Liverpool which is owned by a Liverpool FC footballer.

Jo’s work reflects the social and political changes affecting the artist immediate landscape, the work highlights the regeneration of our cities and lives.

Samples of Jo’s work can be found at:

Shown at the View Two Gallery Liverpool during the Independents Biennial Liverpool 2006. The work has since been on Loan to the restaurant Que Pasa Cantina in Liverpool, UK.

Skull was worked inspired by working with the restaurant Que Pasa Cantina bringing in influences of the 'day of the dead'.

“When the City Speaks: Liverpool Icons”

First shown at the South Bohemia Art Gallery in 2007. The work is a collage featuring Icons from the city of Liverpool. The work includes a drawn skyline representing the city and contains images on The Beatles, Artists Tracey Emin and Peter Blake who are associated to the city and some of the Transvoyeur artists. The work also includes images from around the city.