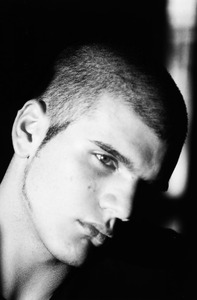 Fabio Costantino Macis was born on 8th December 1986 in Sardinia, Italy, where he is still living in. Keen about art and performing arts, still very young he took his first steps in photography, interested in investigating the reality with an eye which has the capacity for giving back to the world his immaculate beauty.
Starting from documetary purposes (he contributes to the creation of some video-photographic reportage about nature and music), little by little his camera push him to go beyond the real data and to feel the prodding for the creation of more complex set-ups out of the usual categories of time and space.
The main character is now the man, his put-himself like flesh under the lights, feelings and mysteries, everything still waiting to be investigated.

The last researches turn attention to the society behavioural dynamics (also thanks to the proddings proposed by the study course in Psychology), and to the relation between man, community and new technologies.

Their creations have been selected by TAUvisual (national association professionals photographers) through the PremioFotografico2009 with the placing: finalist. Their other creation have been exhibited

- in the contemporary art gallery "IcoGallery" in New York, Chelsey, in the exhibition called "The Alluring Figure" from 5th to 27th February of 2010

- in Greek, in a collective called "Artists in Wonderland", Exhibition curated by Irene Albino in Tsagkarda. August 2010

- in other little gallery in the Sardinia island.

- In Semptember 2010 he's been selected to join the "International Dictionary of Artists 2011" through the World Wide Art Books.

“About beauty and Uglyness: WHO CARES?!”

Against violence against women